Hopefully someone can point me in the right direction. 2 weeks ago we had an issue with out FSL P48 that we converted over to a Ruida controller(it’s been running great for 2 years, 8-12hrs a day). Just wouldn’t cut properly, ended up checking the beam at the laser head and was getting a TEM01(Donut) beam shape. Figured the tube needed replacing since it had been in use so long and general consensus online that I could find says the same.
Replaced with a new Cloudray CR90 Tube, problem persisted, exact same donut beam shape, odd’s of having that same problem being from a defective tube seems highly unlikely. So we decided to swap to a new power supply in case it’s a power delivery issue.
Just got in a new cloudray M100 this morning and got it all hooked up, beam looked perfect at first. Now the been will fire proper in one pulse at 18ma(artificially limited max power in Ruida controller to extend tube life) then next pulse it barley outputs 4ma and gets the donut again.
Running a line cut from lightburn will output a solid proper beam for a random amount of time then the power drops again.
Our closed loop water chiller is working fine, temps in the morning start at about 19c. But we’ve never had issues with that low of a temp before.
So any suggestions would be GREATLY welcomed.
I’ll attach a photo of our hardware component setup.

[Album] Imgur: The magic of the Internet 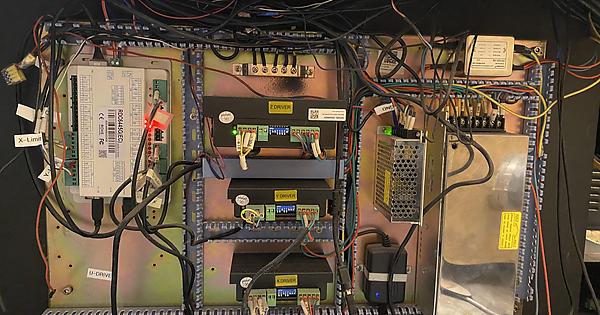 FYI I’m not a electrician or Laser tech, I’ve just learned what I’ve needed to over the years for maintenece and repair.